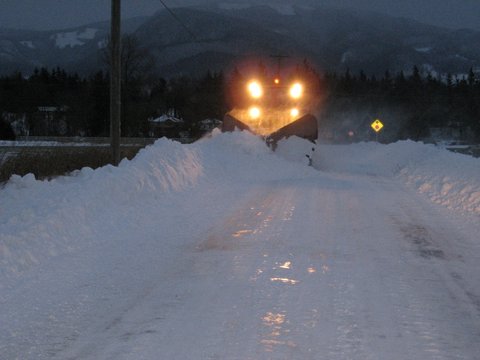 These routes are maintained in the event of a snow storm.

These routes are maintained by the WSDOT.

Highest Priority. Roads are paved and constructed as All Weather Roads with A.D.T.s, (Average Daily Traffic) of 100 and above. These roads may include bus routes.

Plow to maintain snow accumulations less than 4”. Provide sand at hills or intersections that have been identified as hazardous areas after snowfall has stopped.

Roads are paved . Normally, secondary roads with over 25 residences, or a road that serves a functional need for public access will fall into this level.

Plow to maintain snow accumulations less than 6”. Sanding will be done only at defined locations that are on established school bus routes during ice events if schools are in operation.

Plow ML 3 Roads after all other class of roads have been completed. Accumulations of snow can be expected to exceed 12”. These roads will not be plowed on a routine schedule. Residents should plan for up to 7 days without service during extreme conditions. **If a ML 3 Road is utilized by a school district or WTA as a bus route recognized by Whatcom County, it would be maintained the same as a ML 2 Road on days that school is open. For all other ML 3 Roads, it will be common to accumulate snow in excess of 8” for extended time periods during storms of intense snowfall. During extreme conditions, residents should plan up to 5 days without service.