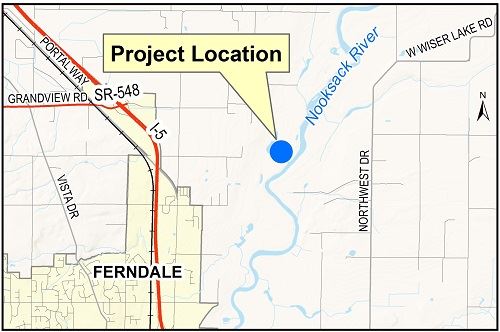 The deBoer Levee provides flood protection to low-laying areas between Interstate 5 and the Nooksack River northeast of Ferndale. Over the winter of 2014-2015, several high water events damaged a section of the levee where a culvert for an unnamed tributary flowed into the lower Nooksack River. A temporary sandbag levee was installed until the permanent repair could be constructed.

This project repaired the levee and improved conditions for drainage and fish habitat along the lower Nooksack River. The damaged culvert and floodgate were replaced with a new, larger culvert and side-swing self-regulating floodgate. The larger culvert reduces the time required to drain floodwaters that overtop as far upstream as Bertrand Creek. The new floodgate remains open for improved fish passage until flood water rise to a predetermined level when the regulator closes the gate, preventing upstream flooding.