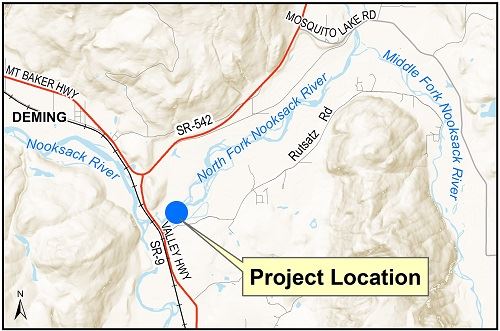 High water in the Nooksack River over the January 29, 2016 weekend caused severe erosion of a 20-foot high river bank to within 30 feet of the Rutsatz Road, a dead end access road for about 150 homes.  Further bank erosion was eminent and would have left the roadway impassable, eliminating the sole vehicular access to the area.

To prevent further bank erosion and potential loss of the roadway, Whatcom County Flood Control Zone District and Whatcom County Public Works constructed a rock toe at the base of the eroding bank, re-sloped the bank to a stable angle, and planted the bank with native trees and shrubs.