Plantation Rifle Range opened in 1971. It began with a 300-yard large-bore rifle range (also called the high-power range) and a trap range. In the mid-1970s, the indoor and outdoor small-bore ranges were added. It is one of only two public gun ranges in the state of Washington. The range sits on lands leased by Whatcom County from a private company, Bertch Timberlands, LLC. The property was historically used as a tree plantation, which is how the site got its name.

The Plantation Rifle Range is one of only two public ranges in Washington State. The Plantation Range also serves as a focal point for law enforcement shooting and training in greater Whatcom and Skagit counties. 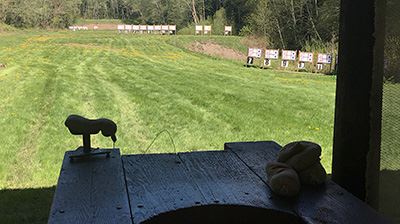 The high power rifle range has 15 covered firing points with distances to 300 yards. Sturdy shooting benches with adjustable gun rests and sandbags are provided. Spotting scopes and chronographs are available to rent. Targets are available for purchase. Centerfire ammunition is not available for sale.

The trap field has an automatic trap available. 12 and 20 gauge shotgun ammunition can be purchased.

Targets, ear, and eye protection, and ammunition are available for sale at the Range
*Ammunition only available for purchase to those shooting at the range 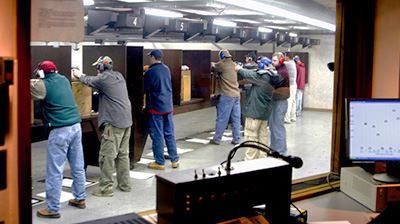 12 firing points with electric target carriers. Maximum indoor distance of 25 yards. Ammunition for use on the indoor range, except for .22 Rimfire, must be either Total Metal Jacket (TMJ), Jacketed Hollow Point (JHP), or other closed-base jacketed bullets.

12 covered firing points with a maximum distance of 100 yards.

Targets, ear, and eye protection, and ammunition are available for sale at the Range
*Ammunition only available for purchase to those shooting at the range

All are bolt-action or .22 long rifle. Sights may be metallic, electronic, or scope.

Firing Line Safety & Etiquette
• While on a firing line all shooters must keep their lane clean, free of hazards, and may not disturb other shooters
• Spectators and coaches must stay behind active shooters while at their firing lane and may not disturb other shooters
• No rapid firing, drawing from holster, or instinctive shooting is allowed
• In case of a firearm or ammunition malfunction; leave the firearm at the lane, muzzle pointed downrange, and notify the Range Officer immediately
• During a cease-fire all firearms are to be unloaded, actions open, and left at the lane. Shooters are not permitted to approach their lane
• No one is permitted in front of the firing lines
• Eye and ear protection are mandatory while on the firing line
• Shooters will clean their lane when finished

We value your opinion. The information you provide will help us better serve you. Please click here to take the survey.