Visitors can travel down the short forested trail to an open, active agricultural field with panoramic South Fork Valley views. Take some time to explore the riverside where Whatcom County, Whatcom Land Trust and the Lummi Nation have been working to enhance wildlife habitat building in-stream structures and replanting native vegetation in the riparian area. The river is home to steelhead, bull trout and salmon.

Future plans for South Fork Park include building a connecting trail to the Overby Farm and Nesset Farm and homestead.

Explore the Galbraith Farm Trail which begins at the parking lot. Hike or bike the first .25 miles through dense forest. You will see a variety of conifers, hardwoods and native shrubs leading to a large open agriculture field. The equestrian trailhead joins the trail at the agriculture field. Elk, deer or bear may be foraging or eagles soaring overhead. Take time to notice the Galbraith Barn ruins about a mile on the soft surface trail. This easy, level loop trail will lead you back to the main South Fork parking lot.
Easy, 2.0 miles loop 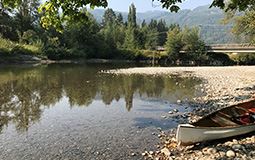 Since the 1960's there was a desire to provide a regional park near the town of Acme that would provide shoreline access, open space, trails, protection of wildlife habitat, and education and interpretation of natural and cultural history. In 2007 planning efforts for South Fork Park began in earnest.

The site consists of three separate parcels totaling 603 acres which include the Galbraith Farm, Overby Farm, and Nesset Farm and homestead. All three parcels border the South Fork of the Nooksack River. In addition, Whatcom County Parks has requested reconveyance of 287 acres from the Department of Natural Resources to connect the parcels and surrounding recreational lands. 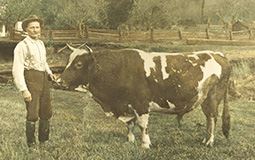 The Whatcom County Library System received funding to digitize historic photos, including from the Nesset and Galbraith family collections, for a Mount Baker Foothills addition to Washington Rural Heritage.
View the collection here