Listings
Listed species are those officially designated by the State Department of Fish and Wildlife and/or the U.S. Fish and Wildlife Service under the Federal Endangered Species Act (ESA) as endangered, threatened, sensitive, or candidate.

Such species include Chinook salmon, bull trout, bald eagle, and California red-legged frog. Listed species are known to be experiencing, or have experienced, failing or declining populations due to factors such as limited numbers, disease, predation, exploitation, or a loss of suitable habitat.

Habitats & Species of Local Importance
Habitats and species (PDF) of local importance include habitat that supports both vulnerable and recreational important species. Vulnerable species, such as the great blue heron, are those susceptible to significant population declines because they are uncommon, have a very limited distribution, or have special space or habitat requirements. 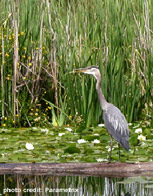